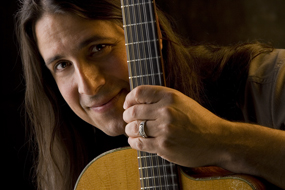 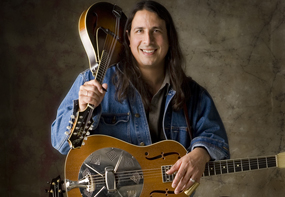 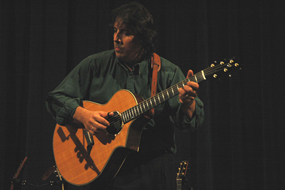 Keith Knight is a Native American solo 12 & 6 string acoustic guitarist, vocalist, and mandolinist, who has been performing across the United States since 1993. His high-energy gutar wizardry takes moderand and traditional acoustic music to incredible heights.

He is considered by many to be one of the finest finger picking guitarists in America. Keith’s music is deeply rooted in Delta & ragtime blues, Appalachian folk, and other Americana genres. His jaw-dropping fingerstle guitar has gained him notable recognition, including a fellowship for music performance from the South Carolina Arts Commision, making him the first “non-classical musician” to achieve this honor in South Carolina. He has been a grant recipient from numerous arts organizations, including: First Nations Composer Initiative, SC Arts Alliance, and Charleston Office of Cultural Affairs. He was voted by Austin audiences to be in the “Top 10 Best Musician” category in the Austin Music Awards.

Among the other accolades of accomplishments, he has also been a juried showcase artist at America’s premier conferences (Western Arts, Arts Midwest, and Performing Arts Exchange) and countless state consortia conferences.

Keith Knight is a former residency workshop instructor for the South Carolina Arts Commission’s Arts-in-Education program for 9 years. In Los Angeles, he co-founded the electric pop band The Panic Choir, where he utilized his electric/acoustic guitar, mandolin, and dobro playing and vocals. Keith and The Panic Choir released a CD entitled Soul and Luna on the Crystal Clear label in late 1993. Critics called Keith’s guitar playing “amazing”, “distinctive”, and “impressive”. In 1997, Keith relocated to Charleston, South Carolina to pursue a solo career in Americana acoustic music. It was there that he created his own record label and management company, Bear Claw Music. In 1998, Bear Claw Music released Hammer Thru the Silence, Keith’s debut solo CD which has been featured on folk music radio shows around the world. In January 2003, Bear Claw Music released Keith’s next CD, Tear It Up, which demonstrates his versatility as a guitarist, vocalist and songwriter. In 2009, he joined forces with Canadian powerhouse guitarist Don Alder to form EXTREME Guitar Duo. In 2013, Keith is in the process of forming Trio Montreal.

As a solo artist, Keith has shared the stage with such great artists as The Smothers Brothers, Melanie, and others. From 1000-seat performing arts centers to intimate 150-seat black box theatres, his concerts combine a variety of musical styles which make his shows refreshingly versatile. He is also known for his humor, wit, engaging storytelling, and audience interaction that continues to captivate and entertain audiences from start to finish.